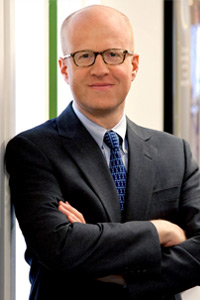 Managing Partner of Frankfurt Kurnit since 2010, Jeffrey A. Greenbaum is one of the country’s leading advertising lawyers.  He is a partner in the firm’s Advertising, Marketing & Public Relations Group and has extensive experience representing advertisers, advertising agencies, production companies, and media companies on advertising, marketing, branded entertainment, and intellectual property matters.  Best Lawyers named him “Advertising Lawyer of the Year” in the New York metro area for 2015.  Mr. Greenbaum is also recognized as a leading advertising lawyer in Best Lawyers, Chambers USA America’s Leading Lawyers for Business, The Legal 500, and New York Super Lawyers.

Mr. Greenbaum is also the Chairman of the Global Advertising Lawyers Alliance.   He has previously served as chair of the Committee on Consumer Affairs of the New York City Bar.  He is also a member of the Board of Advisors of the Brand Activation Association.

Mr. Greenbaum is a frequent speaker on advertising issues. He has spoken at the Federal Trade Commission’s “Protecting Kids’ Privacy Online” workshop, the “FTC at 100” workshop, the FTC’s “Rebate Debate” workshop, and at the FTC’s “Green Lights and Red Flags: FTC/BBB Rules of the Road for Advertisers” program. He has also spoken at conferences and programs sponsored by NAD, ANA, BAA, NARC, ERSP, ERA, INTA, ASIPI, AICP, and many others.

Mr. Greenbaum has been quoted in publications such as The New York Times, The Washington Post, Advertising Age, Adweek, and many others.  He has appeared on the CBS “Early Show” and Bloomberg Law. He is the author of the chapter “Specific Corporate Compliance Challenges by Practice Area: Advertising” in Corporate Compliance Practice Guide: The Next Generation of Compliance (LexisNexis, 2009). He is also the author of the chapter “Developing an Advertising Compliance Program” in Advertising and Marketing Litigation Best Practices (Aspatore, 2007). He has also served as the “Legalease” columnist for Shoot magazine.