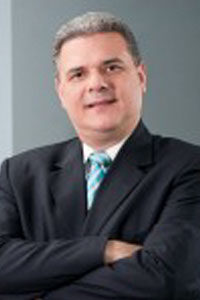 Jaime Ángeles specializes in corporate and IP laws, including unfair competition and IT/e- commerce and has a vast litigation experience in these fields. An important part of his professional work consists in drafting and negotiating contracts for IT companies, such as non- disclosure and license agreements.

Jaime is considered a pioneer in his country, particularly in the area of IP, and was a key player in the negotiations to legalize the market of ringtones in the Dominican Republic.

Jaime is ranked in Band 1 for IP by Chambers and Partners.

Jaime is a popular speaker and has lectured in seminars and trainings organized by the Dominican Supreme Court of Justice. He has been called in to present to judges and District Attorneys in Honduras, El Salvador and Guatemala.

The most recent topics of his speaking engagements have been “Data Protection & Privacy in Latin America” and “Emerging Technologies”. He recently spoke in a panel on an ITechlaw Webinar on “The Latest Developments in Social Media in the US, Europe, and Latin America from an IP Rights Perspective”. Jaime has authored a long list of articles and publications – the latest one entitled “False Advertising & Unfair Competition in the Dominican Republic”.

Jaime is committed to contributing to the community and the development of the laws in his country. He was appointed by the President of the Dominican Republic as official member of the Commission who worked on the draft of the Order Market Code. The IP and Copyright laws were approved by the National Congress based on the work of the Commission. Also the works from the Commission was at the origin of the approved Anti-trust legislation and Consumer Protection Law. Jaime has given input to the Computer Crimes Laws and the ecommerce and Digital Signatures Law.

Jaime is fluent in Spanish, English and French.